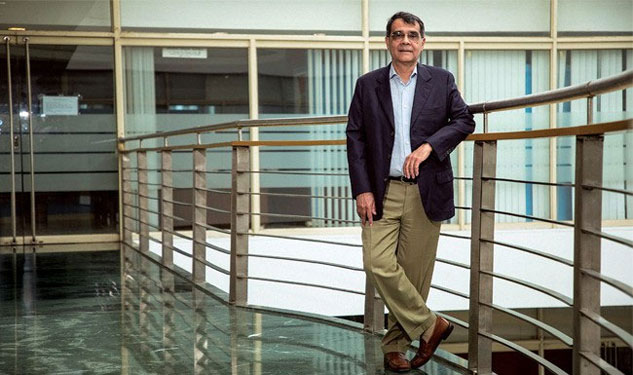 When you mist yourself with the best perfumes in the world, you have Mumbai’s Eternis Fine Chemicals to thank for the aroma - Anwesha Mitra

Odours have a power of persuasion stronger than that of words, appearances, emotions, or will,” notes one of the greatest books that describes the power of scent - Perfume by Patrick Suskind. Albeit a dark and morbid fictional plot, the narrative’s observation is not too far from the truth. You realise that as you enter the office of Eternis Fine Chemicals, on the tenth floor of a corporate complex in Mumbai. It is an oasis of calm, suffused by soothing fragrances.

There are several bottles with transparent liquids on the table and founder Rajen Mariwala invites us to take a whiff. Each bottle bears labels with indecipherable words, which call to mind school’s chemistry lessons, but Mariwala’s enthusiasm as he explains the contents of each is very relatable.

India Inc is all too familiar with the Mariwala family history, which traces its name to pepper trading — mariwala in Gujarati means one who deals in pepper — in the early 1900s. Today, the name is the keeper of several successful businesses, including FMCG giant Marico. But, Eternis - from ‘eternal’ in old French, is a brand that is obscure, as the founder prefers to stay out of the limelight. After some persistence, a virtue he values, he agreed to speak with Outlook Business and share how Eternis Fine Chemicals became one of the leading players in this very niche space.

“I think the journey essentially started some time around 1992,” he says. Using their knowledge from the legacy oleochemicals business (chemistry of plant and animal fats), Eternis was founded on the advice of an industry friend. India was adjusting to the economic liberalisation, giving birth to several companies and industries. The demand for soap and detergent fragrances was picking pace and Mariwala found his opportunity. The company began catering to domestic clients such as SH Kelkar, Oriental Aromatics and HUL. But the first year was a revelation for the management, and they realised that the Indian market wasn’t big enough to fulfill their aspiration.

As Mariwala began scouting for new buyers, travelling to various markets, he met a trader in Singapore who was keen on partnering with Eternis for a multinational company. “I made multiple visits to spend time with them. On the third visit, they said they want a product, but they wanted it within a week!” he recalls. While it would be a challenge, Mariwala jumped on the opportunity. This was possible only because of the company’s anticipation in keeping its plant equipped ahead of demand.

In India, there is often a lead time of about two months before a product reaches its destination. But foreign players are used to deliveries in two hours! Mariwala was left wondering how the new company would cope with such a challenge. They decided to set a trend in the domestic market, to become a global force. Although it was not fashionable at that time, Eternis started holding stock for customers in their respective regions, ensuring deliveries within 24-36 hours. This foresight, according to the founder, has been critical to the company’s success.

With only 12 popular formulas in the portfolio and a few specialty chemicals for specific clients, Eternis has created a strong foothold in the global market and caters to nearly 45 clients across 20 countries. Their molecules are primarily used in soaps, detergents, household products, fragrances and fine fragrances. Mariwala remains guarded about the clients’ identities, but a Crisil report states, “Eternis is the preferred supplier of the top four flavour and fragrance houses of the world —Givaudan (Switzerland), International Flavors and Fragrances (US), Firmenich (Switzerland) and Symrise (Germany)”.

The key objective was to play to its strengths and focus on scale. “One of the first realisations we had is that most of the Indian suppliers of the time used to offer hundreds of products but without scale. So, we focused on the economies of scale versus the economies of scope,” explains Mariwala. This allowed them to service clients faster. Michael Carlos, former president – fragrance division, Givaudan, and current board member of the Swiss company, says, “When Indian suppliers were high on promises but low on meeting commitments, Eternis stood out because of its reliability and quality.” He believes the company remained competitive due to the efficiency with which it delivered the products. “They quickly rose to being arguably the most important global player in the case of PTBCHA (one of the 12 formulas),” he adds.

The team added a second plant in Pune in 1997, which allowed the company to increase production. “We could focus on lean manufacturing, cutting inventories and working capital,” Mariwala says. By focusing on operating efficiencies, Eternis has consistently maintained its revenue growth over the past two decades. Its total income rose from ₹4.66 billion in FY15 to ₹6.24 billion in FY18, and is expected to grow 10% annually. Meanwhile, its debt-to-equity ratio has also remained stable at 0.9x.

Mariwala believes that in India, Eternis’ primary competitor is Privi Organics (under parent Fairchem Speciality). Fairchem makes 33 aroma chemicals and beats Eternis in terms of revenue, at ₹13.4 billion in FY19. Koushik Bhattacharyya, director and head – industrials, investment banking at Avendus Capital, says, “The aroma chemicals industry has three or four large companies in India, and then the size of the companies drops sharply. Eternis is one of the top two players in this space, the other being Fairchem.” But Mariwala is not worried. He says that in most molecules they deal with, they have either a leading or second position with over 30% market share. Carlos adds, “Eternis gave good products at good prices along with good service. They scaled up production rapidly and this made them very competitive.” Bhattacharyya believes that there are several factors working in favour of Eternis. He says that the company adheres to high standards of corporate governance even though it’s not a listed company. Secondly, the company tends to operate in molecules where it can create a leadership position for itself. “When operating at scale, raw material prices are more favourable for you than for peers and the overheads are allocated over a larger base. So your margins are much more defensible and robust,” he says.

According to the Crisil report cited earlier, the company’s operating margin improved to an estimated 12.5% in FY19 from 12.1% in FY18, due to a better product mix and increased absorption of overheads. Bhattacharyya adds, “They’ve seen very good growth in FY19 and it is expected to continue over the medium term.”

Today, Eternis rests easy with a comfortable lead but it has not always been this cosy. Mariwala cites several examples of errors that the company had to tide through. “When we sent a sample for one of our first major orders, we received feedback that it had a ‘cabbage-like’ bi-odour,” he narrates. That was due to the higher sulphur content in the phenol. “So, the R&D team went back, figured it out and tweaked the formula... it was fun,” quips Mariwala as he notes that a 100% success rate is impossible.

“There’s one thing about us: we’re committed and we’re dogged. We make mistakes, we learn, and then we try again. We’ve made enough mistakes. But, we just said to ourselves ‘persist, persist, persist’,” he says. It is this persistence that helped Eternis shake off the stagnation it fell into between 2009 and 2012. According to Mariwala, the company had grown to a desired scale, but they were stuck in a routine that wasn’t seeing much innovation. Besides, a major manufacturing deal had fallen through in 2012.

“This was a co-producer deal for a fragrance major, who wanted additional capacity but did not wish to invest,” recalls Mariwala. Not allowing that setback to hurt the company deeply, Eternis was determined to chart a stronger course. They started with expanding their sales and research team. The sales team grew more international in nature with the appointment of directors in Geneva, US and UK. And with a team of over 350 employees, Eternis began raising its production capacity and the number of molecules. Back then, the manufacturer was only making six molecules and had a total capacity of 8,000-10,000 tonne. The number of molecules has doubled today and production capacity tripled, to over 30,000 tonne.

The forging ahead may seem Quixotic but Mariwala was careful with his choices. The molecules in Eternis’ portfolio today are all synthetic concoctions, because Mariwala was wary of the price fluctuation in raw materials for natural blends. For the same reason, he has been conservative with flavours too. While synthetic fragrances are created using chemicals or modifying an existing natural chemical composition, natural fragrances such as of sandalwood or lemon are those obtained by distillation or extraction.

When Mariwala goes after an opportunity, he exercises an aggression that has proved good for the company. For example, one of the products that Eternis added in 2016 is coumarin, the chemical that boosted its revenue growth in FY18. An extremely popular ingredient in perfumes, coumarin smells like fresh hay and is used to support odours such as lavender and rosemary. Due to the versatility of the product, Eternis sought to expand its coumarin business and acquired the market leader in this formula — AIMS Impex last year. The deal was reportedly worth ₹500-600 million and it consolidated the company’s position in this chemical. This gave a boost to their existing capacity of 1,500 tonne. Eternis is now its only manufacturer in India.

Anand Sanwal, who ran AIMS Impex for 13 months after the demise of his father, wrote in a blog post that after talks with four other prospective buyers, he found “immediately a better fit” in Eternis. He writes, “I explained my criteria, they explained their vision, they put a non-binding offer together that was clean/clear and we got moving on diligence.”

Bhattacharyya believes that the deal will serve the company well. “Coumarin is a complementary product for Eternis because they had just entered this area and it was a small product for them. Going by the philosophy that they want to attain market leadership in their chosen molecules, this fit in very well,” he explains. Avendus Capital was the exclusive financial advisor to Eternis for this transaction.

It is not a small bet that Eternis placed with coumarin, but the opportunity before them must be tempting. Currently, the global market for aroma chemicals is pegged at $3.8 billion and it has a promising future. According to a Ken Research report, “The industry is expected to grow at 5-year CAGR of over 5% and become a $5.2 billion market by 2023. North America and Asia Pacific (excluding China) are the biggest markets.” Eternis is making the right moves in this direction. Today, it exports to countries such as the US, UK, Germany, Brazil, Mexico, Singapore among others, which makes up 80% of its business.

Mariwala is not discounting the growth potential in India either. He sees huge scope for the F&F (fragrance and flavour) market here, especially in the fabric care space. But the company caters to mid and high range products while the country is used to consuming cheaper detergents that do not use exotic fragrances. Additionally, liquid soap and detergent, which use premium fragrance molecules, are yet to gain popularity.

It should be a while before they can tap the domestic market to its fullest and meanwhile are working on a competitive offering. “We have been working on changing the process for making an existing molecule that will knock off nearly ₹100 million from the overall annual production cost,” reveals Mariwala without divulging further details. It’s all about scale and operating efficiency for the 56-year-old veteran. “I look at tonnage. I want to be the largest producer of aroma chemicals in terms of scale,” says Mariwala. And his mantra? Making better quality products cheaper and faster than any other competitor.